This has been another year of compassion at Good Shepherd in 2019.

We helped the Homeless, the Hungry, the Sick, the Oppressed, the Prisoners, and the Seafarers. Thank you to all who supported the Outreach Program, volunteered for homeless shifts, bought Shop Rite coupons for Florham Park food pantry, donated gifts for Christmas at Sea and the Lutheran Home for Children in Jersey City. Our congregation has been very generous to many people less fortunate than us, in this improving economic year.

The Committee continued participation in Family Promise of Morris County, acting as a support congregation for Stanley Congregational Church, Chatham for two sessions. In addition, 16%, $1,000 of the congregation’s Outreach Funds was given to the Network.

The Lutheran Home for Children in Jersey City received for Love Sunday many toiletries and suitcases.  Thrivent Financial for Lutherans provided $250 to buy additional supplies.

This year, Team members are able to enter the Elizabeth Detention Center and talk to Illegal Immigrants housed there.  This highly personal and emotional Ministry enables us to help the oppressed prisoners.  To date all of the inmates we have visited have been granted asylum.  $850 (from the 2015 Social Ministry budget) has been given to Pastor Ramon, Santa Isabel Lutheran Mission to buy supplies for inmates at his Ministry at the Detention Center.

Christmas at Sea, in December, hopes to provide 50 or more satchels of gifts collected at Seafarer’s Sunday, Christmas wishes, and encouragement to seafarer’s on  ships in New York harbor.   Thanks to the Sew n’ So’s who knitted the hats. In addition, many tins of cookies were baked for seafarer’s on God’s work, Our hands Sunday in September and other times.

Each month, members contributed food supplies to  and served food at the Community Soup Kitchen in Morristown with members from Holy Family Catholic Church and Calvary Presbyterian Church. The Committee also collected many bags and boxes of food from the Wall of Food for the Interfaith Food Pantry of Morris County.  In addition, Thrivent Financial for Lutherans provided $250 to buy additional food supplies. Over the year, rmore than 1510 pounds of food was given to the Food Pantry.

The Sew ‘n’ So’s are a group of folks who meet at the church every Monday from 11:00 Am to 2:00 PM to knit and crochet items for distribution to the needy. Here are the type of items they create:

Organizations that have received these items include:

Lively conversation abounds on almost any topic as items are created around a table. Members bring their own box lunch and group snacks are sometimes available.

Lessons on knitting and crocheting are available to new members who have never done this before or who are looking to expand their skills.

Twice a year is pizza party day when pizza is delivered by our local pizzeria. 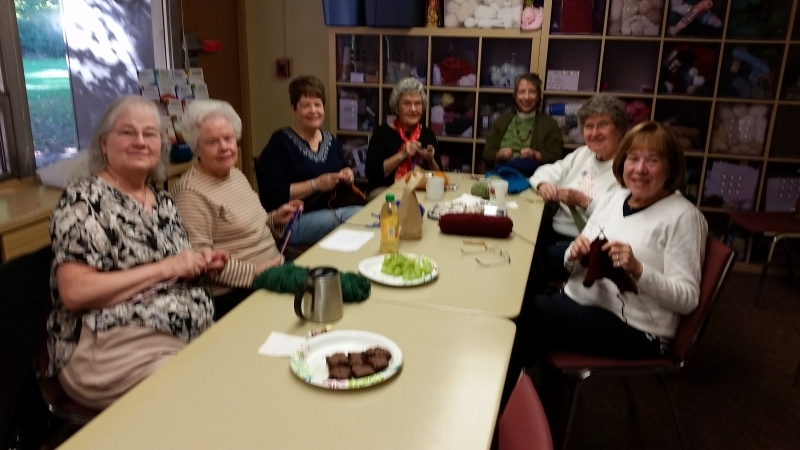 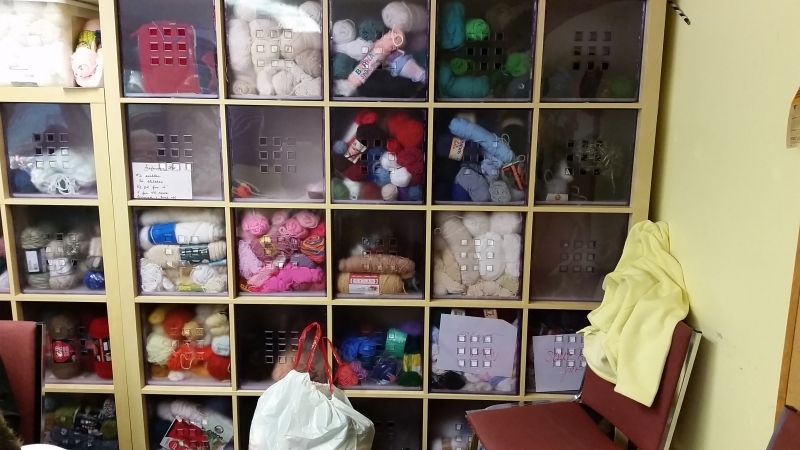 Every year Good Shepherd participates in the Morristown Community Soup Kitchen Hunger Walk. This year Arthur & Leslie took their turn to take the walk on October 18. It was a cool breezy day with the sun peeking in and out of the clouds. They were able to collect $375 from church members to donate to the cause. See the slide shows of scenes along the walk.

Scenes along the Hunger Walk on October 18 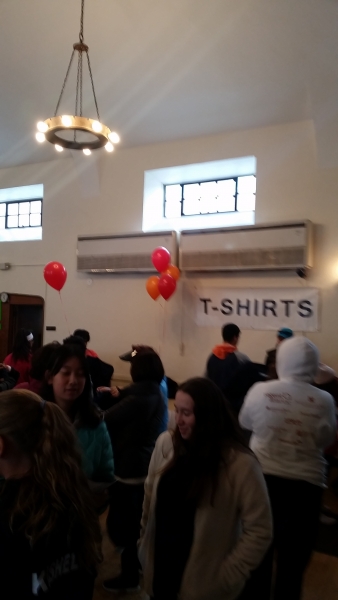 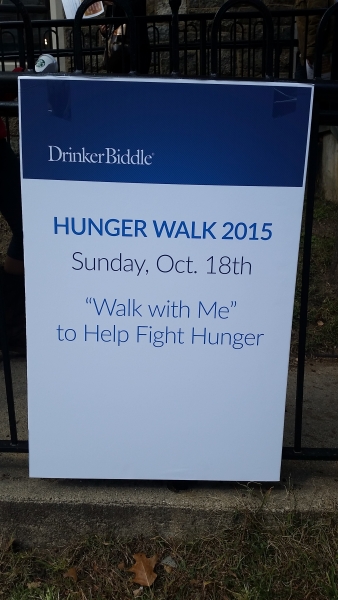 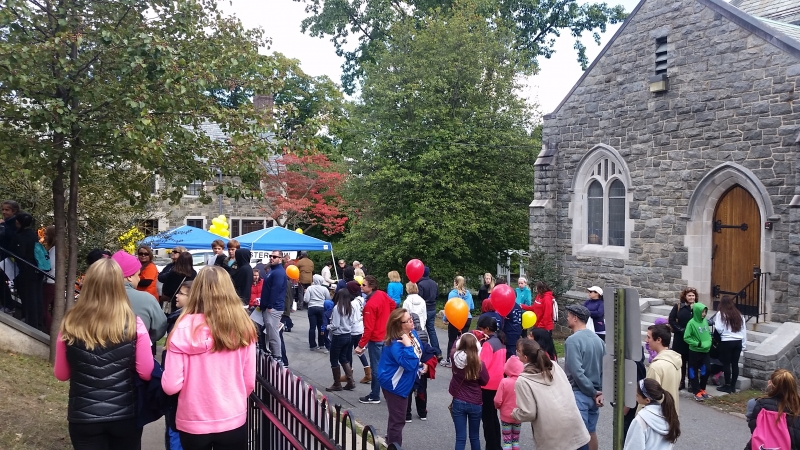 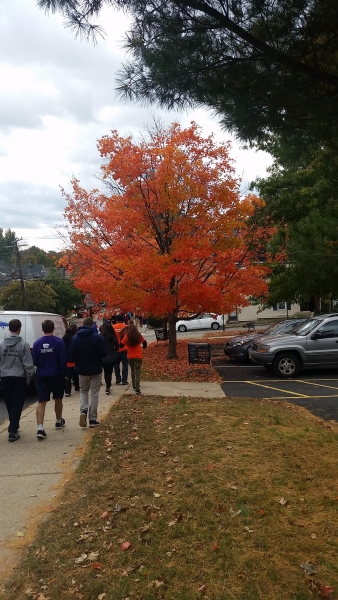 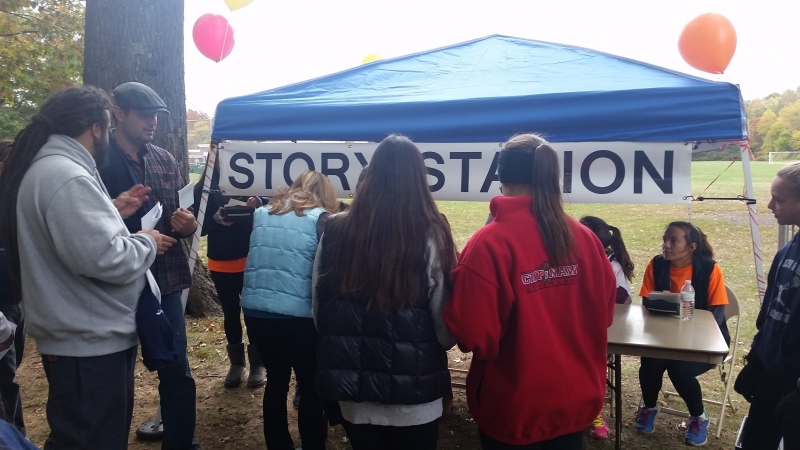 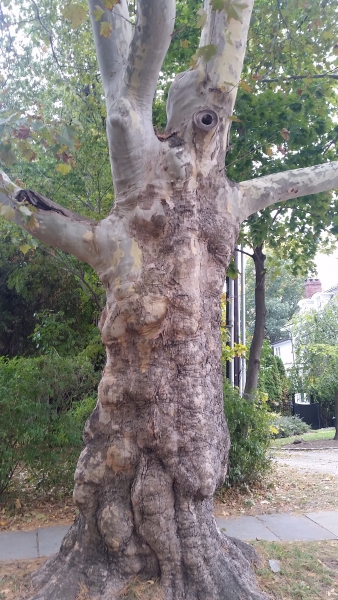 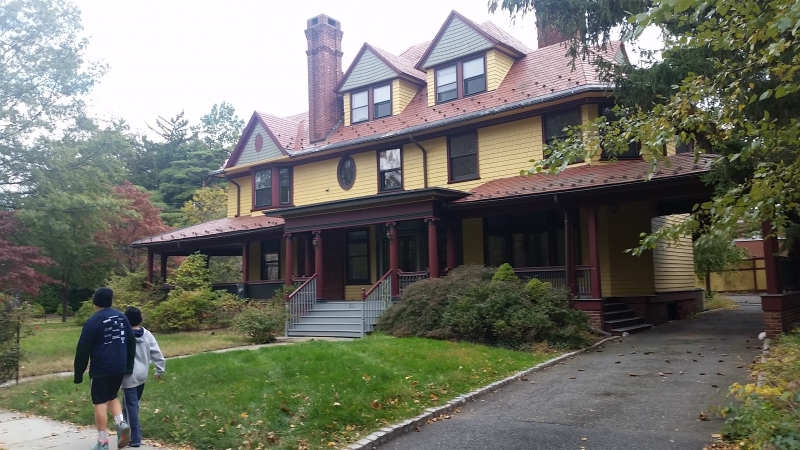 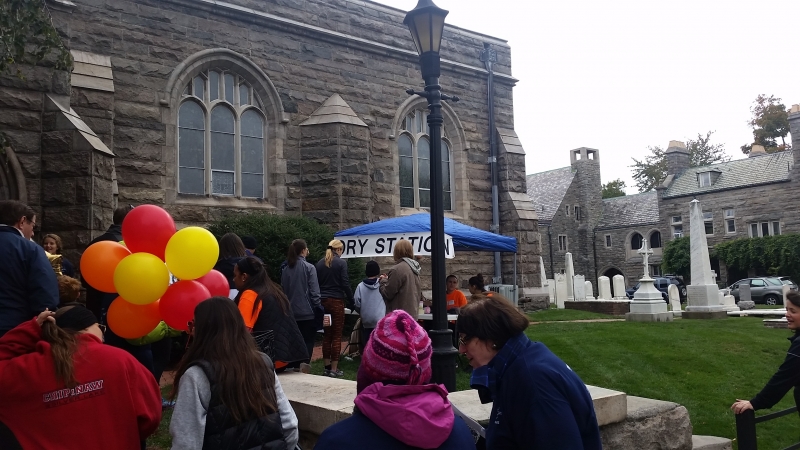 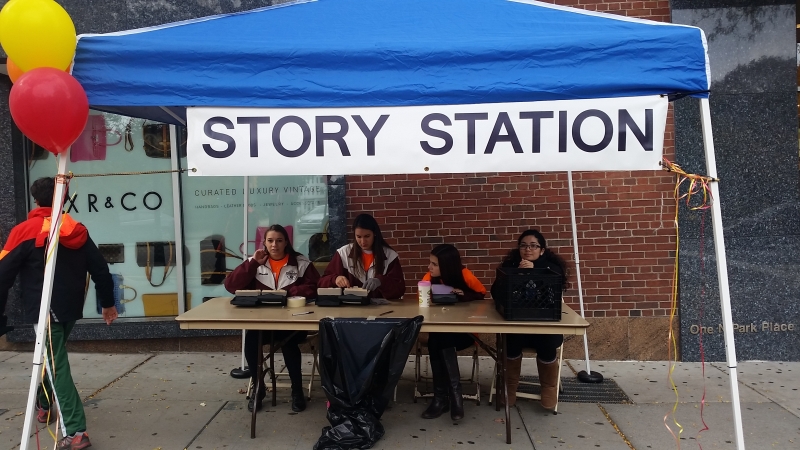 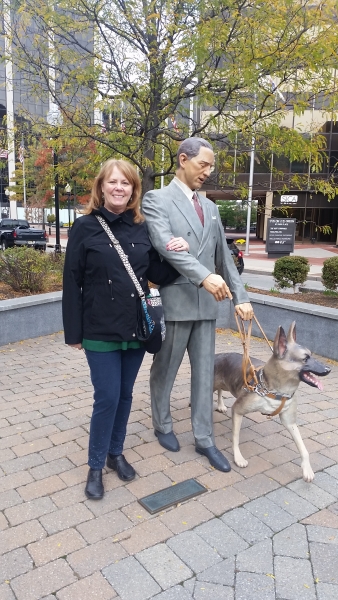 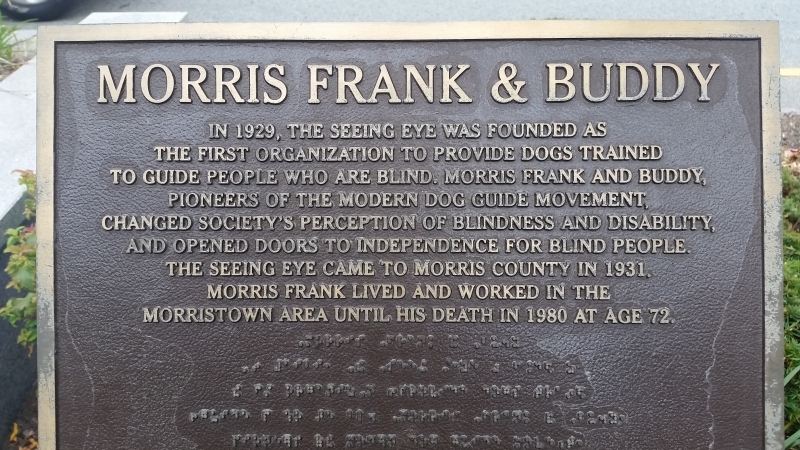 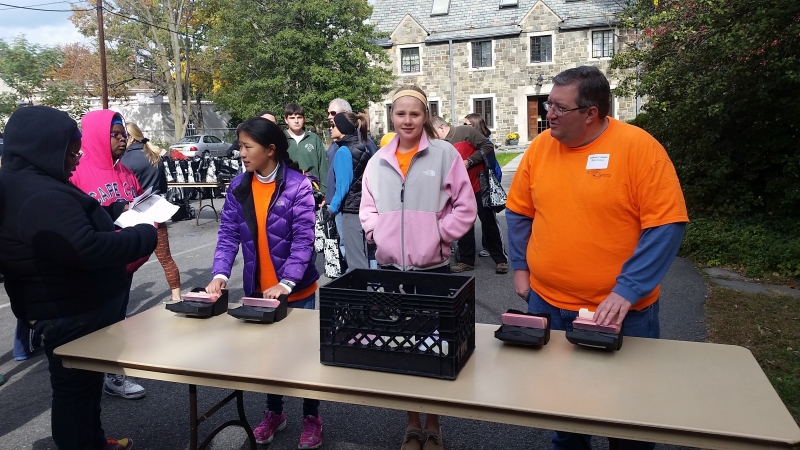 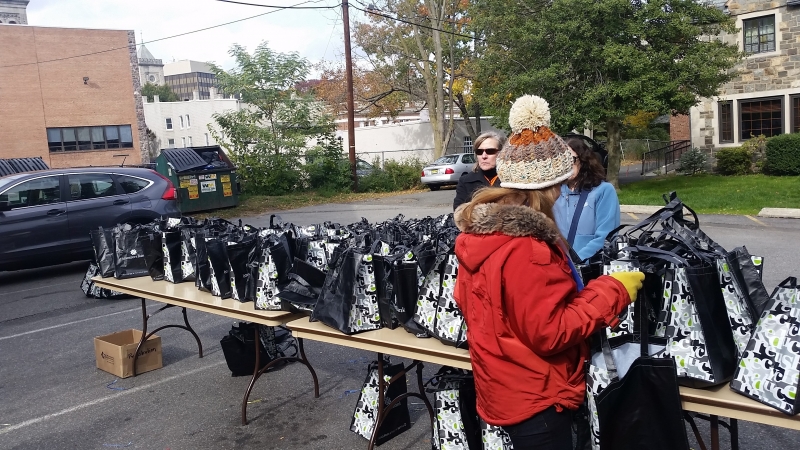 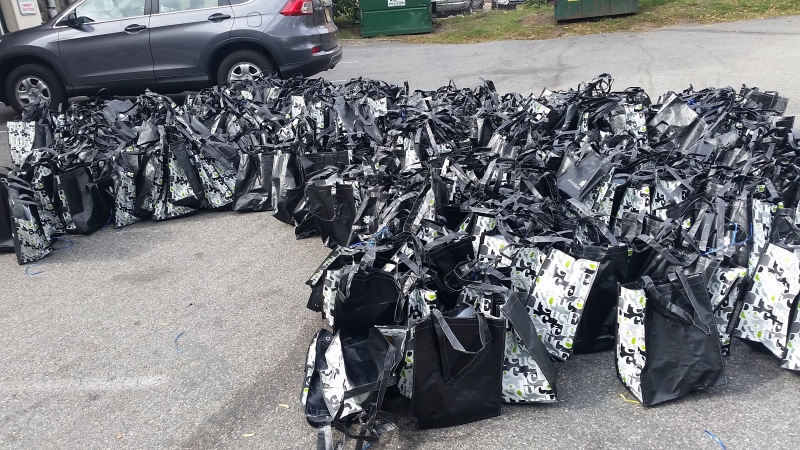 The Elizabeth Detention Center, a converted warehouse located in the middle of an industrial area a stone’s throw from the runways of Newark airport, has been under almost constant fire from local advocates including AFSC Immigrant Rights Program, the Lutheran NJ Synod Immigration Task Force, IRATE & First Friends and several others for inhumane and substandard conditions.

Marty and Alice Schwartz and Patty regularly visit assigned immigrant detainees weekly. For first-time visitors, the visitations led by Rev. Marsh Luther Drege (Executive Director) and Ms. Makda Kalib (Social Work Intern) at Seafarers International House are ideal, offering a brief onsite orientation and security vetting (the presentation of a driver’s license and the name and ID of the detainee to be visited).  The visit is limited to one hour (at the behest of Elizabeth Detention Center).  At the conclusion of the visit, there’s a very brief post-visit conference.  Marsh, Makda and New York visitors then return to New York, but the Schwartz’ and the Roehrer’s and any other GSL visitors return to the church to pick up individual cars and proceed to Tiffany’s on Speedwell Avenue near the Hanover Road intersection for a brew and burger.

Patty and I have visited Dayib (asylum seeker from Somalia) virtually every week from October 2014 to June 2015 when he was granted asylum (he now resides in Lincoln NE), and Ken (asylum seeker from Nigeria) virtually every week since August 2015 (he hopes to hear about his claim today).  In all honesty, I embark on these weekly visits largely out of a sense of duty to offer just a little bit of hospitality to people who are otherwise isolated without family, friends or other visitors.  But invariably I leave the Elizabeth Detention Center with a much greater sense of joy and friendship – as if I received the hospitality.  Initially, the conversation is guarded (after all, the visitor and the detainee are strangers).  Eventually, as the relationship develops, the conversation becomes more free-flowing with an exchange of information about the United States and the asylum seeker’s homeland, current world news, conditions in the detention center and personal stories.  Both Dayib and Ken have spoken eloquently about how important the one-hour visit is for them and how grateful they are for the time taken to visit them.